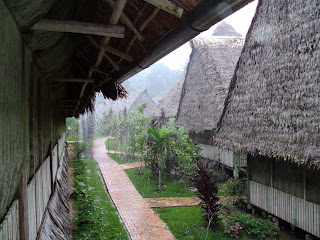 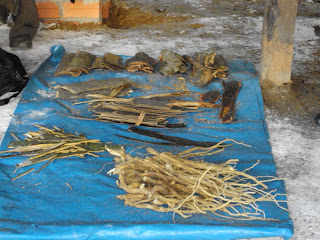 I woke up in my iquitos hotel (hotel Maranon, very good for a jungle town) early after tossing and turning most of the night. I had had a great dinner the night before, at a restaurant called Fitzcaraldo (named after the film director), it was some really juicy fish kebab with chips, called plate Piscina de Amazona or somthing similar. I ended up dreaming of that dish a lot during the week ahead. I turned up at the blue morpho office at 8.30am odd, and met the others doing the tour, along with the American guy who runs the show. They looked mostly 'normal' people, although i did hear some conversations about 'spirits' and so on that sounded bizzare. I spoke to one pretty normal looking Aussie called Julian and one totally crazy but quite decent Ukrainian guy called Rolan, who was returning for the umpteenth time, he had a few interesting things to tell me about withccraft in Ukraine. There was also an American from Miami, Jesse who seemed pretty hyper but also had a few stories about seeing things and various psychic stuff. he was obsessed with what people put in their bodies, which i think is perfectly plausible if you live in USA where all the food tastes of plastic.

Anyway, after a few hours we went to the camp. I was a bit disappointed as it was only about an hour (55km) outside Iquitos so wasnt fully in the virgin jungle. Seems the previous camp they had was 200km up the river, right in the heart of the jungle. So there were no jaguars, monkeys or dangerous animals about, or cannibals unfortunately.

The people were a broad mix. One woman who looked like shed had chemotherapy for cancer, a few pretty weird looking guys, a few normal looking ones, a couple of cute Eastern European girls, but not really any total new age fruitcakes (thank God)

The centre is run by an American, Hamilton Souther, and the main local Shaman, Don Alberto, along with a local manager Johnny who seems superefficient, an intern Mags who is Scottish but has an English accent (read public school Scot) and an English guy who is the apprentice Shaman, called Chris, who looks like the guy from heavens Gate cult and was previously a psychic. Apart from that he seems quite decent.

The first activity once we dumped our stuff into these bare bones jungle huts, was to go to jungle to 'meet the trees' that we would be eating/drinking in the Ayhuasca sessions and the shamanic diet (see photo). we were encourtaged to hug them, talk to them and introduce ourselves. There were 11 out of the 30 people who were coming for the second or more time, who seemed to keen to. Alarm bells started to ring a bit when i was the only person who thought that this is a silly idea. I nodded to them for good form but didnt get involved in such nonsense.

Then all the barks were described to us, together with how they appear as spirits durig Ayhuasca sessions. ie one appears as a native warrior, one as an anaconda, one as headless giant etc.. This made me even more skeptical of this drug - seems strange how what is essentially DMT can have exactly the same effect on everyone.

i got the feeling here that all this talk about spirits in the camp was just part of sone kind of mass hypnosis thing combined with the drugs, but right now i havent taken the ayhuasca yet so lets wait and see.

Tonight ive started the 'shamanic diet' , where the Shamans sing an Icaro (its a weird song that summons the spririts, like using an amazonian Uija board ;o) i drank a revolting drink with 8 typres of tree bark in it, and for the next week i will not use soap, toothpaste,deoderant, shampoo etc. and will eat a totally plain bland diet that consists only of a really bony and nasty tasting fish, chicken (on alternate meals) with boiled rice and baked plantin (disgusting) and a really horrible yellow drink which is some kind of grass with water, to give me some calories. There is no salt, oil, flavours, or condiments of any kind. Also on 5 of the 7 days at the camp we fast after lunch, before taking the Ayhuasca. We arent allowed to meet people from the outside or even touch anyone (except you can shake hands with the 2 shamans) They also say no sunbathing as you dont have any energy from this diet obviously and you dont have any salt in you to sweat.

Tomorrow is the first Ayhuasca session, and im now looking forward to it whehter it does affect my life or not.

Day 2
In the morning, one of the girls in the cabin said she heard growling beside her bed last night (Mags said you could hear 'spirit jaguars'. I personally dont beleive it. When its raining humingbirds wait in the eaves of the huts, so i think its them she heard.) But it just shows you how everyone (except me) is thinking. Well i must be missng something. The shamanic diet started today. 11 of the 30 are doing it, mostly people who've done this a lot but including 2 other new people plus me. everyone is saying how brave we are but in all our cases its just that we are totally ignorant and have no idea what we are in for.

Breakfast is rice with 3 hard boiled eggs. No milk or coffee etc is allowed, no salt etc of course. The best thing to do is to mash up the eggs and put them in the rice, and try to eat it that way. It doesn't taste of much, pretty flavourless. Lunch was a burnt piece of chicken with rice and a fast for dinner before the first Ayhuasca ceremony. At 5pm we have to drink another drink from the fermenting bottle of this nasty tasting tree bark which according to the Shamans, 'gets the tree spririts to come and live permanently in my body to keep me healthy' See, who needs doctors? ;o) Again this sounds like as plausable as Santa Claus but anyway lets see...

All the talk in the camp is about visions and spirits and people being possessed. The scary thing is everyone seems to beleive it except me. These people sound like the kind of people you get on these ghost programmes when they basically scare the shit out of each other when all they actually hear is a bump which is the neighbours cat (have you ever seen a ghost on most haunted?? have you?!!!)

At 8 will be the Ayhuasca, in a special large hut called the ceremonial house. There are 6 toilets for 30 people, 2 showers, and everyone has a mattress, a basin to be sick in, a cup of water to gargle away the taste, or to wash the face/mouth, a roll of toilet roll, and a pillow and blanket as it seems its normal to stay there most of the night. I can see that this stuff definately has a strong effect on people (by the crazed look in the veteran psychonauts eyes mostly) but whether it will just be this dmt chemical giving me crazy dreams, or whether it is 'spirits' lets see. Since many of the 'head spirits' appear as specific people/creatures then it will be a good way to prove it as such. At least im finding out the hard way, through my own experience, so i can look a pro/con person in the eye after this and state what really happens.

Its really hot and sweaty here, made even worse by the Shamanic diet, and i need to shower in the cold water (there is no electricity here or hot water)about 4 times a day.
Posted by Alan at 21:44