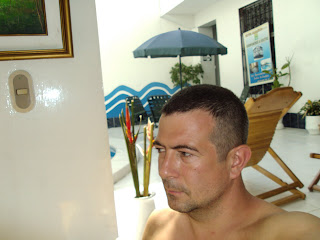 The main event in this holiday is a 9 day ‘shamanic workshop’ in the middle of the Amazon, which starts on Monday. ( http://www.nationalgeographic.com/adventure/0603/features/peru.html ) I will be in the same place as events took place in the classic banned in every country video nasty, ‘Cannibal Holocaust’ ( http://en.wikipedia.org/wiki/Cannibal_Holocaust and you can watch it via wwww.surfthechannel.com ) which is a pretty mental film, I recommend watching it. The director i beleive even went to court to prove that it wasn’t a snuff movie…well anyway its an isolated camp in the middle of the jungle with no electricity. I’ll go without oil, salt, coffee, tea and all normal food for 9 days, where I will be in isolation and not be able to even touch anyone, and indulge in 5 sessions of Ayhuasca, which is a tea made from a jungle vine and a plant, and which induces vomiting and hallucinations. Its said that everyone who takes it meets a little old green woman, who is the forest god, and also a giant snake. ( http://www.dailymotion.com/video/x39tss_ayahuasca-the-snake-and-i-english-1_politics )
If you allow the snake to eat you then you gain enlightenment. Personally I’m a total skeptic on these things, as you can gather, but I also believe you can only critizise something that you have experienced, so here goes (i've even gone and got my first ever skinhead since i wont be using such trendy modern crap as soap, shampoo or toothpaste over the next 9 days - maybe im missing something, is this why Estonian men do the same? Is the male population of Mustamae all in a state of permanent enlightenment?). I’m increasingly thinking to myself what an idiot I am for putting myself through this shit but hey what the hell

I do wonder what the other people will be like at this camp. There are I think 10 others. I’m hoping some cute chicks but I’m not holding my breath as cute chicks don’t generally go for hardcore self deprivation. I’m guessing a crossection of nutjobs, ex hitmen, and people with serious issues, all of whom I intend to avoid like the plague. I’m hoping against hope there are no self absorbed aroma therapists who play bongo drums, or spritual outreach craft workers, although they will be funny to take the piss out of at least. It might be fun to kidnap them actually. I must discuss this option with the local Indians.

I haven’t taken any malaria tablets because this 9 day thing means I cant take anything like that, as well as no alcohol, sex, or drugs for one month after, and no pork for 6 months (I’m not sure why on this - does it temporarily turn you jewish?) I’ve been flying over the jungle now for 30mins and all I can see is jungle as far as the horizon - what pricks are talking about disappearing Amazon? There is plenty of this green inferno left, I can tell you. Near where I will be, I believe are some of the last uncontaced tribes in the world. It would be funny if they actually were cannibals like in the film. Its basically about the remotest place on earth so don’t expect me to be answering your email any time soon.
Posted by Alan at 21:01