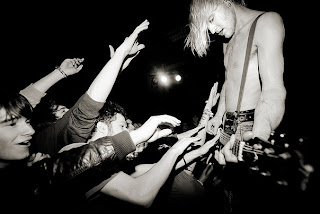 Can't you feel it right now? It's in the air, thats for sure. The deep down nervous energy, the boiling resentment - Im sure its not just me, its everywhere. Id say if you want to grow a cult army of disenchanted followers to start the revolution, then NOW, dear boy is your time.

Punk im sure of it, is about to take off on a second wave - what with a whole generation of disenchanted feminist mindfucked youngsters, thanks God for extremist fagins who can warp these young minds into a frenzy of hatred, be it against government, parents, blacks, whites, businessmen, gays, nazis, muslims, chinese or just more general hatred. Well I suppose it gives them something more interesting to do than World of Warcraft.

I've been more than a bit (pleasantly) surprised this last week by the punk offerings in a small city like Tallinn. Twice this week, i've had the pleasure of full on Punk gigs, complete with a proper moshpit. First with Kaptain Korsakov on Friday then tonight a whole bunch of bands in Von Kraal, headlining, the (pretty unimpressive) Psychoterror.

Friday i cant tell you much about, i understand it was good but i also understand that the evening began with us finding a very cheap Vodka place and drinking it in a Tallinn Law students leaving do (i think that was it at least) And the vodka was even cheaper at the party, which led to 3 days of not needing to top up (great training for the Marathon De Sables)

Tonight i was sober (since its thursday and actually i dont really drink so much) Von Kraals selection was two small and hungry bands - the first was so so - then when second band, Guiseppi Perverdi (what an awful name) came in  i was just asking myself, why the hell do people go to a punk gig to 'dance'? Fortunately, like a dream come true that amorphous brawl of a moshpit appeared.

For those of you who dont know, a moshpit is what happens at the front of a punk/thrash concert, its at its best when someting fast and thumping comes on. I suppose its a combination of people jumping into each other and pushing each other with some force and energy and  hoping that when you jump, there are other people to crash into, otherwise you end up on the floor, feeling like a dick. Although it looks violent (and ladies, please keep off there, its not clever and you just get in the way) its not so bad, and is usually good natured unless you get the odd nutter who does actually start a fight (no one usually notices though to be honest) but the adrenilin rush from a good band is unbeatable, the energy, slipping on a beer stained floor and still managing to stay up, or jumping off the stage into a pile of random people who's name you will never know, or in a larger one, surfing on top of the crowd until you get to the stage then jumping off.....well, thats the kind of 'feedback' i miss in cold hearted Estonia, so these times really made me see that there is a heart beating under the thick layers that smothers the passion in any typical Estonian.

The 2nd band had to stop as they broke their drums (Rock and Roll!) but the final headline band (this Psychoterror were, if im honest, disappointing. I kid you not - they had sheets with the lyrics on them that they were reading from! If i was a teenager, id say FAIL. (but im not) Also, they just didn't have the energy of the 2nd guys, althugh they did get a good moshpit going, but the floor was slippy by this time (mainly from a watermelon that randomly found its way being torn apart in the moshpit)

Anyway, seems punk is not dead after all - i even got some bruises to show it - can see the start of somthing big here so watch this space!
Posted by Alan at 02:15