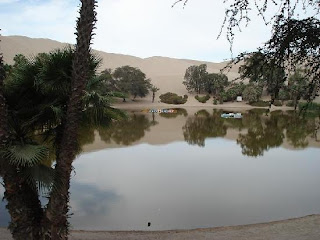 That night I decided to get a bus to a place called Huacachina, which is a desert oasis about 4 hours south of lima. I got there late at night so checked in to a random hotel and fell asleep. The next morning was pretty surreal. I was in an oasis in the middle of a desert, surrounded by really high sand dunes. It didn’t help that I’m reading Bulgakovs’ ‘master and margerita’ at the same time. There was a ‘sand boarding competition’ on, I think it might have been a big one as the tv was there. One of the contestants kindly let me sledge down on her sand board, although I should have tried sand boarding really. All the hotels in this little place are similar. Check for one that has a swimming pool that works though, as mine only was on some of the time. Its pretty cheap and the ONLY place to eat is called ‘Bolepo’ which also is a hotel. It was amazing food and really cheap. There is no wifi anywhere but there are a couple of internet cafes. Just ignore that the hotels say ‘internet’ it’s normally a lie to get people in and their internet is permenantly broken.

I went for a walk in the desert, aptly prepared with a towel, a postcard to write, and socks so I didn’t burn my feet, a book on Esoteric Science by Rudolph Steiner and woefully non useful factor 2. After 2 hours I was totally lost in the dunes, but anyway, I wrote a postcard and got burnt. And wandered around and eventually saw a dune buggy in the distance (they do tours in the desert) and so I followed its direction and got home. It was truly beautiful in the desert, with not a living soul around, and the amazing colours of sand. luckily i just met a girl in the bus station who took a photo of me there so here it is!,
Posted by Alan at 02:32