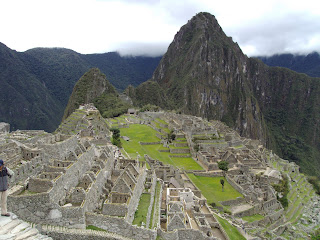 An amazing $190 of package tourist heaven. Fair do's these guys know how to fleece Gringo, but it also means its not busy which is great. Its a pretty impressive site (understatement of the year!), straight out of Lord of the Rings, you can imagine Aragorn turning up and killing some Orcs. There is even a long stair/ladder up to the ruins on the far mountain where a few people die falling down as its a tough climb, just like the that at Cirith Ungol.

Its one of those few places in the world with a real 'magic' feel to it. You can just imagine Incas cruising around doing their normal things like stargazing, worshipping aliens, and having sex with their favourite llamas.

I'd like to come again one day - there is a pass you can enter by at the top, so you turn a corner at sunrise, and bang, there it is.

The site is between the gateway to the jungle, and the mountains, hence its location. If you go further into the jungle you can find another ruin which was the Incas last stand against Manuel and his pals from Barcelona (who had guns).

There were lots of stupid looking Llamas which made it very satisfying to eat Llama and chips afterwards (i avoided the 'genuine inca experience' and stayed clear of the llama bordello). I'm glad God made the most tasty animlals stupid looking (like chickens, prawns, salmon, cows, pigs and llamas) so you know 100% that the guy you are eating isnt missing out on much there.

My internet here is really slow so ill download more good pics later. in the photo though, if you turn your head, you can see the image of the Inca king in the mountain. And if you look at the smaller hill, its in the shape of a Condor. They also just found a few months ago pre inca ruins undrneath these ones, so this place was important long before. I have my own theories of course.....
Posted by Alan at 22:15