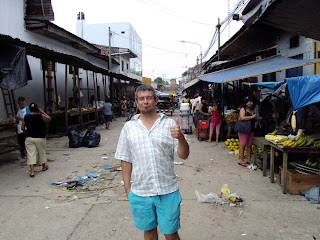 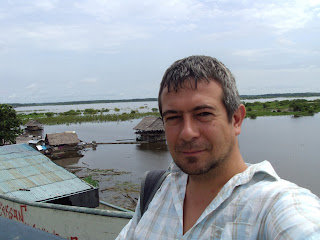 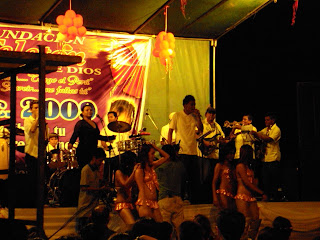 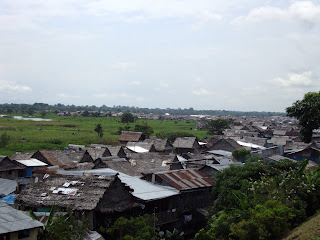 Iquitos is a place that has grown on me a bit. Being totally isolated in the middle of the Amazon jungle, 90% of the people are basically trapped here, no matter what happens, and now that times are tough it seems that 90% have no choice but to hustle for a living, selling chewing gum, cigarettes, or their bodies. i noticed that a sign that you are rich here means you can afford shoes or spectacles. If you are super rich, you have a car (very rare).

The population is around 400,000, which makes it the biggest city that cannot be reached by road (and never will) so it makes it a freindly and safe place - the criminals would have nowhere to go exactly, unless the green inferno surrounding them.

Its hot here, and steamy, and there is always one smell or another. I went to a club last night and made the cardinal error of ordering a vodka with red bull - $10 !!! I guess it has to be flown in so any remote luxury is super expensive. fish and turtle and alligator is cheap.

There seems to be a pretty nasty bunch of Gringos living here too, judging by the stuff written around - check this out, sounds like the comments on baltic business news! - http://www.dawnontheamazon.com/blog/2007/04/17/is-gerald-mayeaux-the-iquitos-scoundrel/ seems this american guy is hated! he owns the yellow rose of texas bar and restaurant - i went there today actually as i thought the menu looked ok, but they didnt serve me after 30mins so i went to some local joint for God knows what from the jungle but it was quite tasty.

I noticed i see the same faces all the time here. The gringos are either 1. ponytailed arseholes, here for some psuedo eco reason. 2. 60 year old perverts here for 16yr old prostitutes. or 3. cute nieve little english chicks here as volunteers for some orphanage or another, surrounded by hoards of local guys kissing their arses all the time. or 4. Ayhuasca tourists who could be any/all of the above, or worse. Thats scary, i wonder where i fit in there :o)

Anyway, here are some photos of the city - the city, the slums, where i like to hang out (and which is pretty much the whole city haha)and the river which becomes the Amazon. The main square is quite pretty and normal looking, with a steel building designed by Gustav Eifel of the tower fame, and there are some really beautiful decrepit old colonial mansions, which belonged to the rubber barons (the reason for Iquitos existance) and now are largely dilapidated.
Posted by Alan at 22:01