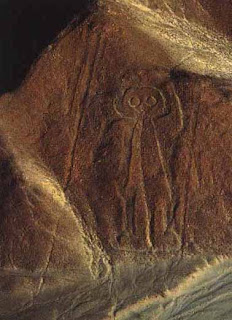 Today I flew over the Nasca lines. It was in a tiny plane and the pilot was mad as a hatter. He was going one handed most of the time and diving and lurching to get the best views. The drawings themselves are really small compared to the numerous large runways all over the plain. I’m not sure why no one seems to notice that. Seems Zecharia Sithcin is correct from what I can see that it was an ancient landing point for the ships of the Annunaki/Nepheliim. (check www.sitchin.com ) There even is a large drawing of an astronaut, I mean come - on! The town of Nasca is quite ok. I had lunch In a good place called El Porton with some Chinese guys. And spend a while chewing the fat with the main police guy as he spoke some English. I had to report my video camera stolen too to him. Every person in Peru who speaks English has a favourite film, Braveheart, and every one asks if its really true, was the English king a homo. I usually answer that all English are like that and they laugh. I like these Peruvian dudes, cool guys and pretty friendly when they aren’t stealing your camera.
Posted by Alan at 06:27