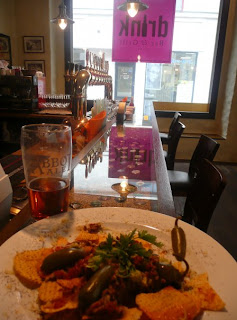 So, what happens in Tallinn on the rare occasion when the sun comes out at a weekend? Total carnage thats what. No one really knows what to do so they get sozzled and kiss strangers.

You have to be careful of course since the trashometer is quite high in this city, as is the STD scene (as most of you single vistors to Tallinn will, if you are into this kind of thing be picking up the same 'Tallinn 200' of girls who party in Vaiki Kaire (bar street) and sleep with any foreigner who tells them they have a job. Most of these girls are actually quite sweet and vulnerable, its just that they dont know their fathers and are so young there is a good chance you are older than him. There is also a 70% chance they will turn up at your doorstep with a suitcase after 1 week, and/or also sleep with all your freinds so do be warned!)

So that sets the scene for the weekend that Tallinn puts up in the summer. All weekend drinking is not uncommon (as i remembered when i went to the bar this afternoon) For most of the year the sun is not a close freind of the far north, although at this time of year it is light for most of the night and so on hot weekends like this, there is an almost constant euphoria.

So this saturday was the 1st anniversary opening of my pals bar, Drink bar in Tallinn, it coincided with i understand the fashion tv model party in Bon Bon and Miss Bikini in Parliment, but as the drinking began at 7pm then the Clubs and bikinis got relegated to 'minana' and we slowly slouched down to the more divey bars in town (which for Tallinners this means almost always 'Levikas' which opens til around 6. This is where everyone who didnt score at 2am ends up to score, its just that now the stakes are lower because everyone is drunk there, and so the 'wounded gazelle' factor is pretty high. It probably helps if you have no sense of smell.

Drink bar works well as a pub, as the food is cheap and tasty, theres no music and the atmosphere is quite laid back. It focusses on beer, with lots of foreign cask ales which you cant get anywhere else in Estonia. I'll stick a photo in soon. Hopefully this plug will get me a free fish and chips ;o)

The main bar street is just like any bar street in UK, except the average girl is prettier and easier, and younger. I blame the lack of fathers here, but really most Estonian girls arent really like that, at least not after they reach 19. Personally i dont like to go there due to the large amount of Brits who walk around goggle eyed thinking they died and gone to heaven, not realising the little blue eyed minx they are buying drinks for and getting on well with has to get up for school the next day.

Apart from a few good exceptions (drink bar and hell hunt) there isnt a great deal in between except for bars and clubs for the pretend rich people (Tallinn doesnt really have any rich people) which are all glammed out and to be honest usually have a pretty false atmosphere. The other end is the Finnish Kareoke bars, i think its best not to talk about those.

Of course none of this matters as the same people go to all of these places, just depending on how they happened to dress that night, what age they are, and what mood they are in. And depressingly, you end up recognising almost everyone, which means you are likely to see your ex hitting on random bald old foreign guys, or the two big brothers of the girl you jilted at the alter last year, who just got out of jail. Or the mum of the girl you picked up the last time you were in Nimeta bar.

These are the kind of reasons i need to get away from this country sometimes. Just one night in Tallinn, even a pleasant one like last night, just brings it home how much of a goldfish bowl this tiny city really is.
Posted by Alan at 02:42