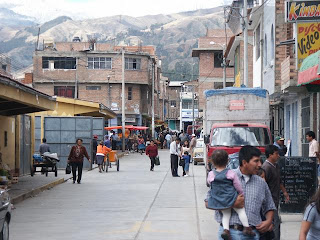 So i woke up at 6am on a bus in the pouring rain and half light. i remembered that i must have arrived in a town in the Andes that id decided to visit. I couldnt beleive it, when i got off the bus and some early rising inca hustlers started annoying me about trips and hotels. Luckily for them i didnt have a hotel as the Hotel at the nearby hot springs hadnt replied to my booking, so i got straight to a random 10 euro a night hotel and fell asleep. the hotel is called Grand Ceasars Palace by the way, it was quite ok and central, although the town is full of cheap digs so i dont think you can go far wrong.

When i woke up the afternoon at least the rain had stopped. its 3090m above sea level, so you get out of breath really quickly the first day (for example the highest Ski Resort in Europe is Val Thorens at a puny little 2300m)

The town was destroyed by an earthquake in 1970, so all the buildings are half built shacks, and it sure is ugly, as you can see. But it does sell helluv cheap Llama hats, scarves and cheesy jumpers. So i bought loads. It was a tenner for a llama top which made me look like an elf from lord of the rings. And now you all know what your christmas presents are.

This Inca supermodel HQ is really cheap though. Steak and chips is 5 euros max, or you can try your luck with a local dish at less than a euro. There arent actually any supermodels here. The locals are homely like Guatamalans, but cute in their own warm shy smiling way. There is a funny smell in the town though. It smells of the Andes. Llamas, local cooking and lack of soap.

tomorrow ill go to Chavin de Huantar, its the main temple complex of a pre Andean cult who worshipped a demon jaguar. I personally think the jaguar was an alien like from Jecheria Sitchins ideas, well lets wait and see. You can see more about it here

http://www.youtube.com/watch?v=S3vOLHPNdqQ&feature=fvsr
Posted by Alan at 07:55