Dont cry for me Argentina 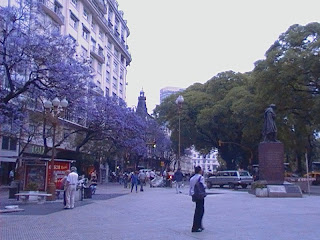 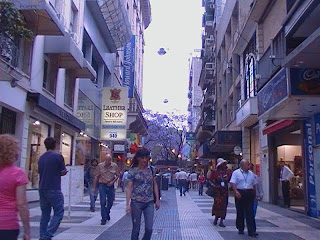 My first impression today of Buenos Aires was that its the first place ive been to so far that feels ok and secure as a city, where i dont have to take so many precautions (ie i could probably have money in my pocket not in a moneybelt)

Its a bit of a melancholy place, with its purple blossoms (i suppose its late Spring here) You can see how its beautiful buildings have faded over the years and what were grand palaces now have become youth hostels and so on. The people seem to know it too, and have that yearning look around them, wondering where it all went wrong. It seems to have gone wrong a few times here over the years, starting im sure with that stupid Madonna song about Eva Peron.

Anyway, im sure if they stick in it'll become great again.

Today i took it easy, with for the first time this holiday a room of my own not a dorm in a hostel (since ive slept on buses the last 2 nights i think i deserve it) i decided out of boredom (it was quiet everyhwere tonight) to go to their only casino, which is two big riverboats joined together. It was a pretty good find, since they have easily beatable blackjack and quite awful poker players. I played poker, so thanks to the generosity of Argentinas kind poker players, the Alan holiday fund is $400 bigger.

By the way, i have noticed when im travelling around - probably the best and cheapest way to learn about a city, its people, and especially its language is to play poker. I met some really interesting local (and expat) people tonight, but more importantly the only language allowed on the table is Spanish, so now im re-remembering all the numbers pretty well.I think if i played there for a month every night id be fluent ;o)

ok tomorrow ill go on a bike tour of the city, otherwise ill get fat from pizza steaks
Posted by Alan at 09:53