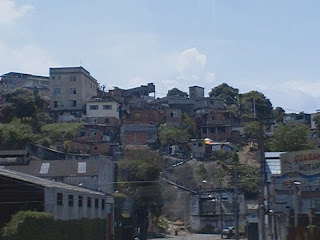 So my last night i went to Ipenema for some dinner, it was a pretty nice steak, in a place called Garota de Ipenema, where it seems some famous guys wrote this song not surprisingly called 'Girl from Ipenema' In the middle of it some guys started doing acrobatics in the middle of the street when the lights were at red, which i suppose it a Rio thing. Ipenema is the one place i felt there wasnt any sign of menace in the air which always seems to hang about it Rio. By the way this is the ghetto again, Ipenema is nice and boring (so no point in putting a photo in, just buy a postcard)

Rio people, although they mean well, do seem to me a bit like Italians, though - all talk and no action. Lifes a big performance to these guys. I mean i didnt even get robbed, killed, or kidnapped. So you just talk about being tough i reckon, and your guns arent even loaded.

Anyway, despite everyone local telling me how dangerous it was to go to Lapa at night as a Gringo, i went out there later with two Sao Paulo guys (William and Tiago, hope you are reading this, hope hangover was well!) Anyway my conclusion to anyone interested is that Lapa is totally normal and safe, im really not sure why anyone ever said otherwise, its just a few busy streets with bars and clubs.

Ok, next morning was a 24 hour bus journey to the Iguazu Falls, but i was so tired, the comfort and hangover didnt even get a lookin.....
Posted by Alan at 09:18