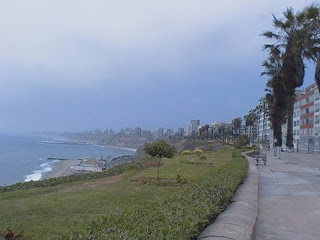 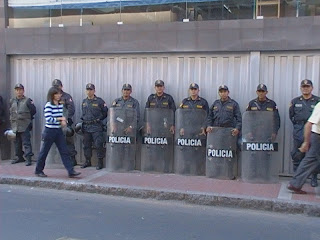 So The word must have got out that i was coming to Lima, as they deployed riot police all over to stop the hordes of Inca supermodels who were expected to descend on the city.

Actually i must admit its either a pretty dull place here or im bored. I spent a day in the centre, which is pretty sketchy, so ill stay down here in Miraflores (im in 'the point' hostel, not a place if you want a quiet night!)

Miraflores (or Barranco where i am, next door) is the posh part of town, but its still not particularly nice if you ask me, except for the seafront part (photo)

Its not warm, and there isnt much to do to be honest. I suggest anyone uses Lima as a 'jumping off point' for the rest of Peru rather than a destination. The people all look like Incas, but there is no culture particularly. So tomorrow ill go to Huaraz, in the Andes. There is a bullfight on this afternoon with a big ticket Matador from Spain (senor Thomas, muy famosa!)

No one, i mean no one speaks English here.

Tonight i will go for a beer. Its sunday and all ive done is laze around all weekend. The local food revolves around seafood and a type of sushi like fish dish called Ceviche which is great.

I even have a plan. Tomorrow ill get a bus up to Huaraz in the Andes and visit a pre-inca temple, then ill go to the desert for 2 days before starting to make my way up to the jungle...
Posted by Alan at 21:02