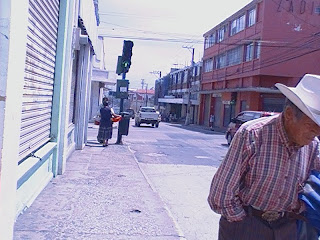 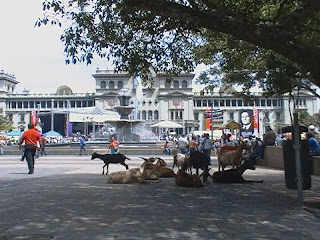 So i walked around various shady streets with the crazy idea that there would be a cafe to write postcards. No such luck here though. It seems all Latin American Cities are either hemmed into little valleys with no where to grow to, or hanging for dear life onto some small craggy plateau, and it seems Guatamala is 3m people doing the latter.
Anyway, i made it to the main Square called the Parque Central, where there was a very pleasant band of guys in suits playing large Xylophones, around the usual main Colonial Buildings. It seems like its the national instrument. It also plainly had a very calming affect on goats as the square was full of them for some reason. as you can see there was no grass left at all.
Posted by Alan at 03:58