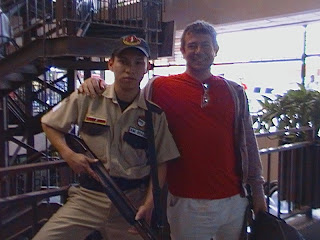 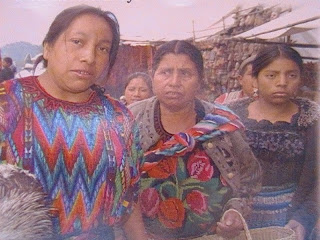 Guatamala City- this felt more like an adventure, as the guidebooks all said how dangerous the place was. So i set off armed with only my trusty camcorder hanging out my pocket like a cheesy tourist, and some assorted shrapnel, and got the taxi straght to where the (extremely crap) lonely planet warned idiot backpackers to avoid, as its where the most robberies were - the red light district between Calle 18 and Avenue 6. It was actually pretty pleasant - it was Sunday morning so all the hookers must have been at Church, and they were replaced by quite normal and particularly ugly Guatamalans walking around in their Sunday best, buying knocked off DVD's from the million stalls selling them.

I noticed that in this town that to be anyone, you have to pack a piece. Every doorway had a guy with a large gun, even some out of uniform. After about 5 attempts (and a few not so nice replies which isnt great to hear when the guy has a large gun) i got one guy to pose with his gun and the idiot Scottish tourist. Im sure he got sacked for this, but it was funny.
Posted by Alan at 03:47