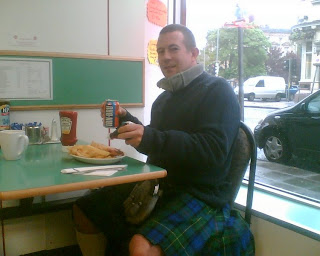 After such a lovely break from alcohol, since December, this week has taken a pleasant lapse, resulting in a break from any creative activity such as inventing crazy stories. So i'll instead post a picture of me dressed as lady eating fish and chips.

After spending good time thrashing my brain to hell and back in the Peruvian jungle, i've decided to balance things out by returning to my old habit og thrashing my body to smithereens by going back to martial arts. Instead of the formal elegance of Karate, Thai boxing seems like just sheer bloody violence. It's fish and chips to Karate's Sushi, but what the hell after a month i'll be match fit again, and im even getting the better of some of the russian skinheads in the sparring.

ok back to warped stories next time...