Poor People Round the World ! 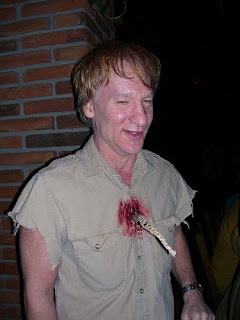 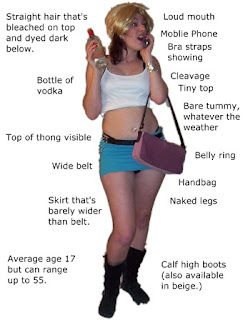 I was thinking today about the idea that a country could be judged on the behaviour of their poor - with how much dignity they act and how they are treated reflects that country. It does ring true - heres the Alan rating system!

Estonia - poor people are generally dignified. Ok they maybe smell a bit but try to dress normally, and look in bins furtively for bottles etc to recycle. The drunk poor die pretty quickly and quietly so you dont see much of them. 8/10 (minus 2 for the smell)

Great Britain (female pictured)- boorish oafs who blame others for their situation, join the BNP while liveing on kebabs, curry, chinese, chips with curry sauce, cigarettes, and beer, drop litter, intimidate normal people, say 'yeah?' a lot, take drugs, and go to Spain/Majorca/Ibiza for thier hoidays, have no taste, and milk the benefits system more than the worst 'asylum seeker'. Give me hard working Iraqis anyday and lets neuter the 'chavs' They do however keep the population up by having 8 children by 9 different fathers by the age of 13. My rating - (2/10) the 2 only because of the entrepeuneurship shown by their benefits scams.

Africa - African poor seem to me to be the most happy and good natured people on earth. i suspect its 1. they resigned themselves to the fact they are powerless about changing the situation a long time ago because they arent related to the ruling junta 2. they have IQ of 12 and 3. its sunny and warm most of the time. (7/10) they miss a few points because of their general smiling acceptance of their lot (which usually means being exploited down gold mines by chinese gangmasters for 2p a year)

Australia - Basically the same as in uk except 1. they have marginally worse taste if thats possible and 2. they beat their wives. - they do eat better though so even steven at (2/10)

Japanese - Japanese poor are the poor of choice. I once spent a jetlagged morning in ueno park, Tokyo with an old homeless philospher who was im sure in that film the karate kid (he may also have been the inspiration for yoda of star wars) he was a great old dude, spoke perfect english and had pefect manners, in fact it was a few hours before i realised he was a homeless guy. They make perfect origami cardboard boxes, and even leave their shoes at the door, which is pretty funny if it wasnt sad.

marks (9/10 - inventiveness and good business sense in the face of adversity, coupled with good manners and retention of dignity(except the love hotel refugees but well nobodys perfect...)


Americans - I think American poor typify all thats wrong with the country. They can be of course amusing because they are so ignorantly tragic - cliches abound of trailer park rednecks, boys in da hood, latino gangbangers, you name it. My experience of poor americans (outside of Hollywood) is that they are a pretty meek and victimised bunch, with a few nasty buggers like 50 cent bullyng and terrorising the population, and earning the general contempt of the generally contemptous population. The general crapness of americanss as people, is reflected in their not surprising exploitation of their fellow countrymen - http://www.bumfightsdump.com/search/bum_fights !! They do lose a lot of points by their awful eating habits - the fattest poor people on the planet bar none!!