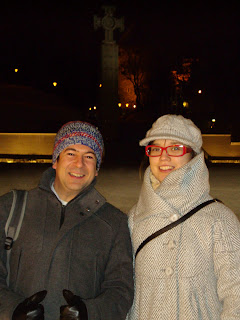 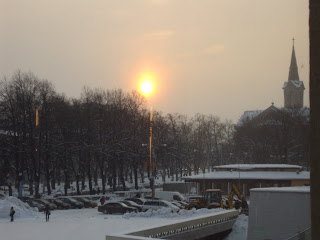 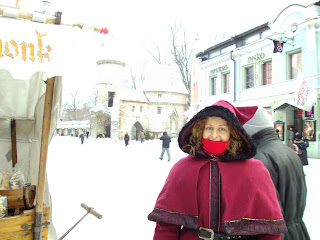 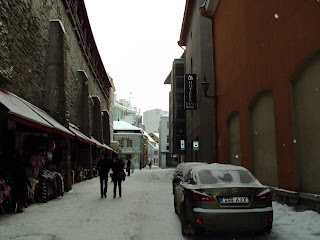 Fear stalks the cold streets of Tallinnn tonight. Walking around in old town is mighty strange right now. Police seem to be at every corner. Seems that there is a crazy killer on the loose. He was found by one woman, beating another total stanger to death with a baseball bat on the old town steps one lovely recent winter (minus 20!) morning. And is still at large. What kind of serial killer decides to start his capers in the middle of the Baltic winter?????
I managed to get a photo of the main suspect, a cheesy looking Scottish guy, pictured with Triinu, his new Estonian teacher at the nazi monument in freedom square (thats it in the background)

The Estonians fought on the German side in the World War two. So they fought with the (arguably) lesser of the two evils against the Soviets - what kind of hell is that...'which side are you on..Nazis or Communists?' Well the Gulag killed more people than the holocaust, it's just the Gulag victims arent as good at sympathy PR (or they dont own the US media like the Israelis do) so its the holacaust guys get all the publicity for the bleeeding hearters cry for. However, it backfired on the Estonians, since after the war, the Russians just kind of stayed there, and half of all Estonians (plainly all the eligible men and the ugliest women by the looks of the country) were thrown up there to die. Anyway, the main point of this Germanic Iron Cross looking monument is to annoy the Russians, now that they are independant.

Personally, I think Russia has bigger neighbours to bully (as it goes through its final death throes) so i guess they arent so bothered. If you ask me they should focus on their strengths, like being corrupt, and exporting cheap vodka and cheaper hookers. And dying in stupid ways while drunk (did you know falling icicles are one of the biggest killers of drunk people in Moscow?)

i hope you enjoy my photos. please note from all estonian photos, English women and Americans (and tongans), that there are no fat people here so if you come it is likely people will laugh at you, because they think you are finnish.