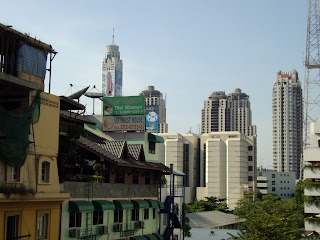 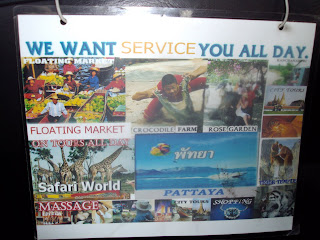 I landed in Bangkok at 6am so got a taxi straight to the hotel - Legacy Suites on Soi 29, off Sukhumvit Street, the main middle class drag in town. 50 pounds a night is steep for Bangkok but it has wifi, a lovely breakfast and a swimming pool (and air co of course which is essential in the sweaty 38 degree heat we had today)

After sleeping most of the day, I ate some amazing dinner in a cheap local restaurant - 2 euros for a nice fresh curry sets you up for the big night ahead. So then I met up with the guys in 'new wave pool bar' on Soi 7, a semi seedy girly bar where a lot of farangs seem to hang out with skanky looking local girls. They took me to the posh end of town, where we had arranged to meet the models from the Bangkok car show.

Seems that in the world of the Thai elite, Europeans are NOT no 1. - our penises are too big and our wallets too thin. The ethnic group of choice for rich Thais are those uber clean polite and efficient asians, the Japanese. To your budding Thai Paris Hilton, a small penis and big wallet is preferable.

We turned up at 'funky villa' http://bkmagazine.com/feature/funky-villa where the afterparty was happening. Lamborghinis and hummers parked outside, the place looked like an oriental beverly hills rather than a 3rd world country. We were the only white guys, but it made it more fun. We bought a bottle of Vodka and the Thai red bull started flowing.

The people were mighty funny. Lily white little rich girls glued to their mobile phones, and sponsored by even littler little spikey haired fat guys who all seemed to look like the North Korean leader Kim Jong Il. Maybe the more dodgy looking geezers around them were security, but the fat wee chinese Cartmans were definately the alpha males of this party. Talking to the people generally, all to a man/woman were totally shallow, and not interesting. I suppose typical Elite of a tinpot country. Not surprisingly even the models didnt have much interesting to say.

There were three bars in the place, and the live band playing actually were quite ok. As in all official Bangkok places though, the venue closed at 2am, so after downing the vodka we left to an 'underground' club....

'Climax Club' is probably pretty nasty when you are sober. Stuck at the back of an underground car park on Soi 11, im not sure how we found it, but here were were at the 'Avenue' bar of Bangkok. Im sorry i cant tell you much more of this place except that the jetlag and vodka started to catch up with me and im sure i couldnt find the dancefloor. When i had trouble finding the exit then i knew it was time to go home. But i understand from the stories, its the main place to hookup if you are western and drunk and its 3 or 4 or 6am (but if you are as drunk as we were it was best to go home or you wake up minus a kidney and with a sore arse)

Today i'll go to the Red shirt Riots, near to my Siam Square in central Bangkok - theyve taken over the whole area. I'm hoping that they will storm the parliment. However i feel like crap, i dont know if im up for fighting Thai police today.
Posted by Alan at 17:16