I know your gay because you listen to Coldplay - Ubud, Bali 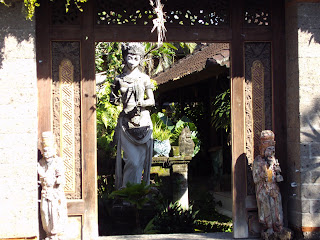 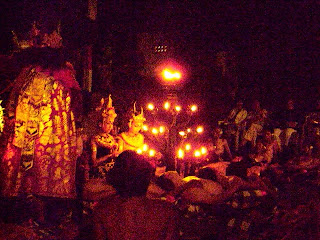 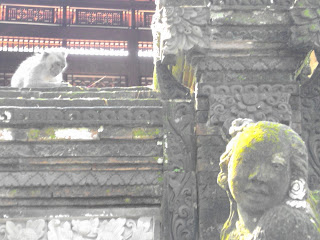 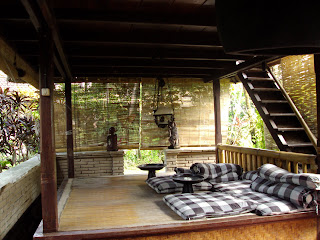 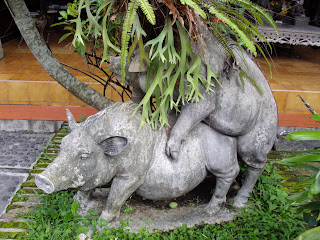 Ubud is everything Kuta is not. It's in the hills. It's overflowing with temples, cafes, art galleries and things that western people consider 'cultural'. Despite being full of twats, its a nice wee town nevertheless.

The shuttle bus drops you off at a place outside one bungalow complex called Dra Sri Bungalows i think its called, where after some deliberations i ended up staying. Its not cheap (180,000 or 15pounds/$18) a night and it doesnt have WIFI but theres an internet cafe next door and most restautaurants etc have free wifi anyway so its all there if you so wish. Ive taken a photo. One day, ill make it so i can title these photos but meanwhile you can guess which one it is.

There are a lot of westerners however in Ubud. They sit though, at the exact opposite end of the spectrum from chunky english girls or beer drinking aussies of Kuta. Here were in the environment of annoying ethnically aware women, and their metrosexual poodlemen, who listen to Coldplay and wear stupid beanie hats, or even worse these really daft 'ethnic' Balinese hats, or even worse headbands.

There are also, thanks God a lot of Japanese. My yellow fever is coming back with a vengeance.

There are two main streets - monkey forest road, and jl Hanoman. The bus drops you on Hanoman. Both are full of restaurants galleries and craft shops, and most are good. You can get much cheaper soap/incence etc in the supermarket if you are interested. On the Hanoman, theres a place called Nicks homestay that looked great, and my new freind Irina said it was good and had free wifi, and breakfast, for the same price as my place.

One place to avoid, unless you want a laugh at some complete tools - you will see it at the top of that road, is a place that does a 'great cappucino' and is called 'kafe' Its full of thirty something guys with beards, wearing stupid headbands, and you can imagine that they certainly have' dancing in the moonlight' on their i-pods as they sip their cappucinos and talk about global warming. And their nightmarish wives/girfreinds are like younger versions of Cheri Blair, and just as acidly smart and correct about everythng (which is why their trustafarian boyfreinds smoke weed all day and keep out of their road) I think id rather hang around with drunk aussies to be honest. Theres a good curry shop at the top too, imaginatively named 'little india' and it has a few resident rats you can talk with if your bored.

There are loads of tours and temple visits and so on around here. I went on one, and deleted all my photos accidentally, but to be honest id say theyre only any use if you are really into this stuff, otherwise a mediocre day out.

The monkey sanctuary at the bottom of the town is good fun, especially if you get a bunch of bananas. I watched some fight too. There are also 3 temples here if your interested, but teasing the monkeys are more fun. The trick is to drop bananas on a 'disputed boundary' where two troups think its their territory, so they fight it out. Check this video, i took, i was kinda hoping for blood but no luck. Theyre kind of like African tribes i suppose, or guys in slums selling drugs.

Heres a really bad film i took of a monkey rumble...

Bikes and motorbikes are really cheap, so its a good idea to get one and explore the areas around - I eventually got out into the paddy fields, its not easy but worth it, so long as you dont get caught in any of the afternoon downpours as the drivers are bad enough here without rain like that.

Last night i watch a 'balinese fire dance' as well as the famous 'kecak dance' (its the one in Baraka) In the fire dance, the dude (for some reason) is in a trance and jumps around in a fire with a horse head on a pole. He walks through the fire and kicks it around - total carnage! I took a video here..