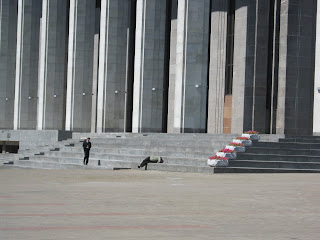 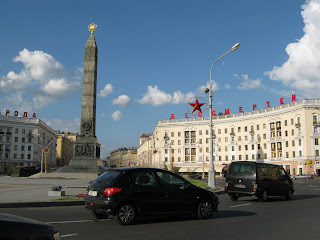 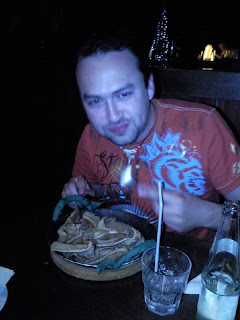 Anyway back to the dodgy stuff.

This weekend i can safely saw was the craziest weekend of my life (which has seen some unusual weekends) We did a roadtrip to Minsk, capital of Belarus, the last dictatorship in Europe. Its a kind of Eastern European version of North Korea, and is run by one 'uber oligarch' called Lukashenko. It's famous for its tractors, and, of course its wonderful cabbage. The problem with the cabbage though is that the trucks have to wait so long to fill in the forms and cross the border, its ruined by the time it gets out, so you have to go and eat it locally, when its in season (i think thats about springtime)

English is not widely spoken. And in the absence of cabbage, we didnt know what to order in the restaurant, as we couldnt read the menu in cyrillic (russian style) alphabet. This was the conversation

5 Mins later the Vodka came. Great. Looked like we were in for a good dinner.
15mins later i got fish and chips (the main lake for fish in Belarus are beside nuked out Chernobul, great!)
30mins later, Niels got some lamb - result! just what he asked for...
35mins later, Justin ends up..'CAN YOU JUST PICK SOMTHING?' out came a place of hairy pig ears. He certainly did get pig something (picture)

The streets however are amazingly clean. Except that i got a nice photo of a gentleman sleeping drunk on the steps of the national hall of somthing pretty important. (thats a policeman coming to move him in the photo)
Posted by Alan at 00:06