I woke up yesterday morning, on a street called Sandy Hook Lane. 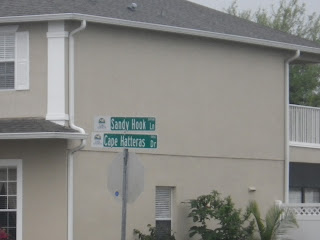 But then soon after I realised that as far as funny and Florida went, thats about it. I've checked out all the Disney related theme parks, been to the beach, been to Ocean Drive Miami, seen the endless roads full of fast food joints and 3rd rate casinos, but today we thought we'd check out a different place altogether, over in Tampa...

There are a string of beaches just south of Tampa, outside St Petersburg. We went to Indian beach, merely for un-political correct reasons. Just like a Spanish expat town,  the number plates are all Michigan and Ontario snowbirds, retiring down here for the winter and, finding there really is nothing to do and both them and their compatriots are utterly boring people, head to the bar and get drunk every day. The beach itself is pretty nice, you even get the odd small swell in winter to surf on. But it seemed to me, that in Florida, there is somewhere else that does everything better, you know what I mean? I mean, do you really dream of retiring to a beach community full of Toronto Property Developers and their fat wives?

Tampa I had some hopes for though, despite the map showing a suburb called 'concerned citizens of Gibsontown area' - barrel of laughs these guys.

Ybor city is the 'cool, retro' part of town. Its kind of funky, and there is a nice cigar shop called 'Corono cafe' or something similar where you can (wow) smoke inside. No cuban cigars of course. But as im sitting here writing about it, it just gets me that it seemed to be 'almost' something, almost something else...like a half a New Orleans but not quite doing it right, or a half any hipster part of town but not unique or ironic or interesting enough.

And as I sit looking like a washed out hungover half bearded escaped cocaine criminal, here in Lima, Peru, at the lovely Larco Mar in Miraflores drinking a $2 Latte, I have to really think to find a place in the West that has any kind of the soul, the vibrancy originality and the pure VALUE that the cities of developing world have.

Lima has really come along a bit since i was last here, three years ago. I only have today and tomorrow, which both promise to be active in the tequila and gambling fronts since on Friday I pay the ultimate price, and go to the jungle and pay penance for my myriad sins under the protective arm of mother Ayahuasca. (see here for the last trips diary!) If i don't come back, dear friends, then its been a pleasure...