Today I should receive confirmation that my entry to the Marathon des Sables was successful. http://en.wikipedia.org/wiki/Marathon_des_Sables 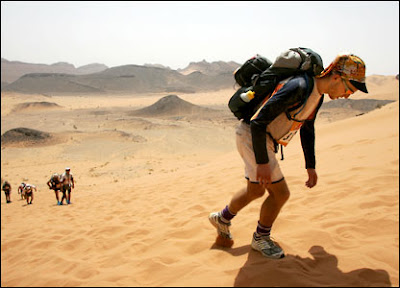 The race begins in April 2011, which basically means I need to be fit/drunk enough to run 6 marathons (254km) with all my food, sleeping bag, clothes etc.  on my back through the Sahara desert in 45 degree heat. It’s the best known ‘Ultramarathon’ in the world and I heard it’s the hardest ( i don’t beleive it though) , so...here I am, about to look like a fool again.

The first day looks easy enough, 17 oddmiles, just to warm up – then a full marathon then a day rest. The next day you climb 20 odd miles through some of the highest sand dunes in the Sahara, with no paths, only a compass. I guess i just have to follow the path of the leading runners, not the camels. (During the 1994 race,Italian Police officer Mauro Prosperi lost his way during a sand storm and wandered lost for more than 9 days, losing over 13 kg (30 lb) of body weight)....nice

The next day is the toughest – a cheeky little double marathon through the searing heat - a 91km run through the desert. Those two days i understand kills the bulk of the weak and stupid off.  Then the (stronger and stupid)  survivors have a final marathon, then a smaller 25km ‘Sprint’ to the finish.
Anyway what the hell at least I’ve started training, of sorts. I managed to get 10km under an hour last week (yes i know it’s only 3% of the race distance you have to start somewhere!) , but even with that I made the schoolboy error of pushing it too hard, and ran with a 20kg backpack on – result? My left knee is swollen to hell and I can’t run for 2 weeks. However  I do have a schedule organised, i’ve pestered a few nutters who’ve done it (or similar) before,  and cobbled together a training programme, which, yes dear readers does involve some small amount of beer but not much (better with whisky – less calories)  but mostly stuffing my face with fruit and veg and meat, and lots of honey.

My plan currently is pretty simple, similar to the Ironman training (without so much of the swimming or cycling) to run 2 or 3 times in the week, with a biggie at the weekend, then throwing in an 8kg pack when my poor joints are more used to it. I don’t plan to wash or change clothes (or make any friends) during the race so i think i can get away with 8kg of food.

I suppose this means goodbye to those lovely healthy weekend binge drinks and waking up with strange animals/dwarfs/amputees/circus performers, but i don’t think I’ll miss that so much somehow. Anyway, ill drop in some updates on my training from time to time, as really if I don’t totally change my lifestyle right now, this race will be one long suicide, and if I die, it will really kind of be my own stupid fault.
People do die doing these kind of zany pranks but, dear readers, on this occasion i have no intention of doing so. I even put together a great collection of ironic  ‘suicide/death related’ thrash metal  songs to run to, so i can put them on if i’m in trouble to cheer myself up.
However i do intend taking bets on my ability to finish (as well as donations to a charity that i haven’t sorted out yet) so more on this later. Currently, in my bad shape ill give EVENS on my finishing the race, with the proceeds going 50% to my costs and 50% to the charity (if i lose i’ll give you the money but you should just give it ot the charity) Anyway, gives me an incentive to actually train for 16 hours a week, which isn’t much fun believe me (but at least ill look good)
Ok now for my first ever road trip through Finland, im on the Helsinki Ferry, which is of course filled to the brim with freindly beer and shot drinking inbreds, I get the feeling that rural Estonia only touches on retards compared to 'marry your sister' rural Finland, but who knows maybe we get a pleasant surprise...
Posted by Alan at 09:40