The strangest of days creep up on a man from time to time.

One minute i'm in London, surrounded by uninspiring zombies pretending they're part of the next big thing. It must be subliminally piped into the tube to forget the fact that they share a house with 5 other people because they can't afford to rent a place of their own, never mind buy something or get a car, and can only afford to go out once a month, or have any time to themselves to actually think or do anything interesting for a change except drink wine and moan.

Next morning i'm in Luton Airport, (a horrible refugee camp of a shed- the very antithesis of the idea that flying is in any way glamorous), surrounded by blabbering gyppos, en route to Bucharest, Romania...

Now, Romania, in most people's minds eye, is full of scraggly little brown kids with no shoes trying to pick your pockets, and these head-scarf clad women with babies begging, as their other children try to pick your pockets. On the bus from the airport, a dodgy geezer tried to sell me a 3 Lei bus ticket for 10 Lei. I think every other taxi driver I got tried it on, but you quickly get used to these quirks as you find that most Romanians are actually

a. Not brown at all - the brown ones are gypsies, who are a hated minority, due to their lack of bothering with such small trifles as the law of the land.

b. Pretty decent and honest and not really looking to rip you off (unless, of course they are politicians/biznismen, lawyers or anything in between - this is Eastern Europe after all and you, dear friend are a foreigner/human ATM)

Bucharest, isn't a particularly pretty or interesting city. It seems like an average hotch potch of pick-n-mix East European Capital city, which of course, it is. You can see a couple of great churches, some grand boulevards, and of course their beloved Dictator Ceaușescu's palace (interesting to read about his ignoble downfall, here. There is a good looking Old town, which is choc-full of bars, cafe's and restaurants and pretty much the only place to go at night (but its not bad at least) There's even a bar called 'Glasgow Pub' (which 'welcomes heavy drinkers' - what a great image my home city has)

Anyway, I got a train up to Brasov, which is a beautiful city in the mountains, and near to the home of Dracula- it feels more like an Austrian mountain getaway, full of ornate hanseatic style buildings and a pretty old square or two, full of those quaint cafe's that you see if every beautiful medieval city (although unlike Tallinn old town, the coffee is less than 2 Euros a pop)

Which leads me on to this evenings dinner, which was Cow Brain, and potatoes...more of which I'll tell you later... 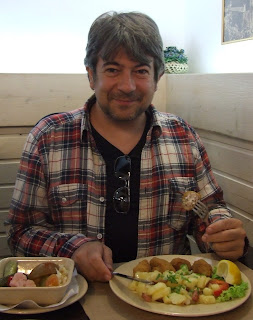