So what the hell is Buffalo like? Well, if youd asked me a year ago i would say that its the place with the Niagara falls that invented Buffalo wings and has a really crap American Football team (all of which are true) But it seems now i know it better, Buffalo, like Glasgow in the past, has been given a pretty bad rep, usually from people who have never visited the city.

You can see from arriving at the place that Buffalo started growing in the 19th century - Things started moving in the heyday of the Erie Canal, which opened in 1825. The city was located at its western terminus which allowed the then sleepy village to grow into a major shipping hub for the fast growing west. It grew exponentially all through the next hundred years as immigrants, particularly Italians, Poles and Irish, flooded in, and by 1900 the city had produced 2 Presidents (Millard Fillamore and Grover Cleveland), had more millionaires per capita than any city in the USA, and was home to one of the world’s largest transportation hubs. The cheap power from the Niagara Falls attracted steel plants and allowed Buffalo to become one of the largest steel producing locations in the US.  And so, like in Glasgow, the wealth from all this industry is reflected in the citys pretty impressinve Architecture.
The downtown area, makes a great morning walk around (Theres a good hostel there too)– start on Main Street at the Market Arcade (also the tourist visitor centre is there) and walk down Main Street towards the HSBC building (this is HSBC US HQ) You’ll see the M&T bank and the Niagara Mohawk Building (one of my favourites) amongst a whole bunch of renovated smaller buildings on the street itself.
Then head west round to see the various art –deco towers including the 32 storey City Hall ,( one of the tallest in USA) and then up to Chippewa Street, which has some interesting ceramic and Terra-cotta buildings built in 1906. The street was originally the citys red light district, but now has a Starbucks and is one of the citys main bar areas– its more the young and drunk crowd here though, more sophisticated people will move on up to Elmwood.  If you walk round here in the morning though, it’s worth grabbing some lunch on this street – ‘the spot’ coffee shop also has some nice food deals and is pretty healthy for USA.
After this, it’s worth walking or taking the bus up nearby Elmwood Street, which runs right through 'Elmwood Village'  and Allentown, the citys ‘artsy’ area. At first the area has the usual bohemian shops and houses, the cafes, tattoo parlours and antique shops and galleries that epitomise every ‘Bohem’ area in every US city. As you move north towards the Wright Knox Art Gallery  it gets a little more suburban with a whole bunch of decent restaurants from every corner of the world, trendy independant  shops and the ubiquitous coffee shops – again ‘the spot’ is the busiest place in town, and it is even possible to see good looking girls here, a rare breed in US (well, for a guy who lives in Estonia at least!)  At night this area has a few wine bars and so on, more for the more sophisticated or the SUNY crowd, compared to beers, shots and fat girls in miniskirts in Chippewa St.
The Wright Knox Gallery is at the north end of Elmwood Street, at Delaware Park. It has a pretty eclectic collection of quite strange modern art (some totally useless like that pictured) and some quite interesting pieces like a Van Gogh and some other famous works.  The area to the north is also interesting for architecture buffs – there are no less than 5 Frank Lloyd Wright houses in Buffalo (amazing, only beaten in the world by Chicago!) and in the area around Delaware park, among the mansions there sits his ‘Martin House complex’ which is open to the public – you can check this out at www.darwinmartinhouse.org  . 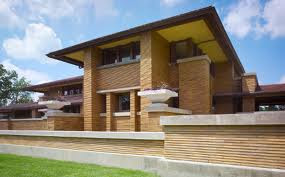 Around Buffalo, there are also some interesting sites – the Great Lakes themselves are quite beautiful, and if you drive for ten minutes outside the city for ten minutes north across grand island, you get to the famous Niagara Falls. You can drive across to the Canadian side from here too, although to be honest it looks quite spectacular from the US side too. You can park for free for 20mins (not many people know this!) if you drive into Goat Island and drive PAST the extortionate parking lot, for 200metres. I suppose that is too far for Americans to waddle, so it’s a WIN for Europeans (those who aren’t fat at least) The Canadian side of the falls is pretty developed compared to the (tacky) US side, which for some reason has about 20 Indian restaurants (does anyone know why?!!!)  And has 2 big casinos (6 decks blackjack for all you card counters out there, with good penetration too)